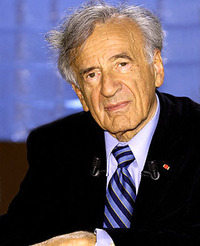 Nobel Prize laureate Elie Wiesel will be the 2012 recipient of the Metropolitan Chrysostomos Award — recognizing action to stop anti-Semitism or discrimination. Wiesel is receiving the award in recognition of his lifelong contribution, as a writer, professor, activist and Holocaust survivor, in combating anti-Semitism, discrimination and intolerance. 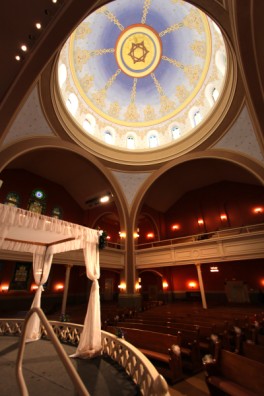 Greek Orthodox Archbishop of America, His Eminence Archbishop Demetrios, will preside over this award ceremony that is being co-hosted by the American Jewish Committee. It will take place at 6th and I Historic Synagogue at 6th and I Streets, NW in Washington, DC on October 25th at 10:00 am before leaders of the Jewish community and Greek-American community in the US. Wiesel will accept the award in absentia via video. This event is part of the Second Annual Washington Oxi Day Celebration, October 24-25.

Wiesel has received numerous awards for his literary and human rights activities including the U.S. Congressional Gold Medal, the Presidential Medal of Freedom, the Grand-Croix in the French Legion of Honor and the National Humanities Medal. He was awarded the Nobel Peace Prize in 1986, and soon after established with his wife Marion, The Elie Wiesel Foundation for Humanity that fights indifference, intolerance and injustice.

Wiesel is the second Nobel Peace Prize and Congressional Gold Medal recipient recognized by the Washington Oxi Day Foundation. Last year, the foundation bestowed on Burma’s Aung San Suu Kyi the Battle of Crete Award, which is given to the woman who exhibits David vs. Goliath courage for freedom and democracy. The award is named after the women of Crete Greece who in WWII fully participated in the first citizen counter attack against the invading Nazis. As the Cretan men fought the Nazis on mainland Greece, the Cretan women joined the old men, boys and remnants of some allied forces in a ten-day battle that nearly defeated the Nazi invasion of Crete. On the first day of the battle more Nazis lost their lives than in any one-day of the war up to that point, including the Nazi’s invasion of France — the world’s greatest military power up to that time.

This award is named after Metropolitan Chrysostomos, the Greek Orthodox church leader on the island of Zakinthos during the German occupation of Greece, who is credited with saving hundreds of Jewish lives. German forces, preparing to deport Jewish citizens of Zakinthos to camps in Poland, ordered Metropolitan Chrysostomos to prepare a list of all of the Jewish people on the island. The Metropolitan told the Mayor of Zakinthos to burn the list of Jewish names and implored the German commander to not deport these citizens, as they were Greek citizens and had done no harm. When the Germans would not listen and ordered him to produce the list, Chrysostomos took a piece of paper, wrote his own name on it and handed it over, saying “here is the list of Jews your required.” In addition, he told the Jewish residents on the island to leave their homes and go into hiding in the mountains, promising them that Greek islanders would provide them with food and shelter. Those that followed his instructions were saved.

In 1978 Chrysostomos was awarded the title of “Righteous Among the Nations” by Israel’s Yad Vashem organization for risking his life to save the lives of Jewish people during the Holocaust. According to Yad Vashem, upon receiving this award, “Metropolitan Chrysostomos declared that he was following the example of Archbishop Damaskinos of Greece, who on 23 March 1943, after the first deportation trains left Thessaloniki for Auschwitz, published an outspoken condemnation of the deportation of Greece’s Jews. Damaskinos was known to have said: “I have taken up my cross. I spoke to the Lord, and made up my mind to save as many Jewish souls as possible.'”

Elie Wiesel was just 15 years old when he and his family were deported to Auschwitz concentration camp. He and his father were then later transported to Buchenwald. Wiesel’s mother, father and younger sister perished during the Holocaust, while he and his two older sisters survived.

Following the end of World War II, Wiesel moved to Paris to study and later became a journalist. Nearly ten years after the war had ended, Wiesel was persuaded by French writer Francois Mauriac to write about his personal experience in the concentration camps. The result was his acclaimed memoir Night, which has sold over 6 million copies in the US alone and has been translated into more than thirty languages.

Wiesel is the author of over fifty books of both fiction and nonfiction, and since 1976 has been the Andrew W. Mellon Professor in the Humanities at Boston University. He had previously taught at City university in New York and was a visiting scholar at Yale University. Wiesel is a frequent speaker on the subject of the Holocaust and has been actively involved in fighting intolerance and human rights abuses around the world.