Washington, DC, October 9, 2018 — The Washington Oxi Day Foundation congratulates 2016 Oxi Courage Award honoree Nadia Murad for winning the 2018 Nobel Peace Prize. Murad, a survivor of ISIS atrocities, and Dr. Denis Mukwege, a gynecological surgeon who founded a hospital in the Democratic Republic of Congo, were awarded the 2018 Nobel Peace Prize for their campaigns against the use of mass rape as a weapon of war. 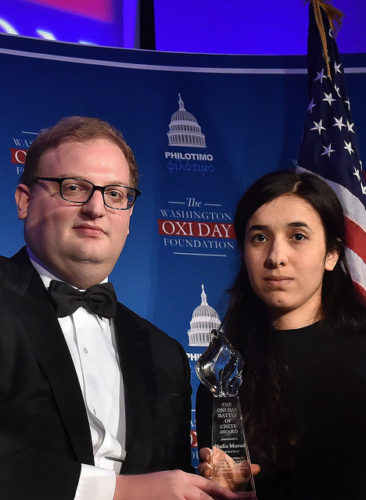 As highlighted in the New York Times, “Murad, 25, has become the voice and face of women who survived sexual violence by the Islamic State. When the Islamic State overran her homeland in northern Iraq in 2014, Ms. Murad was abducted alongside thousands of other women and girls from the Yazidi minority, the group singled out for rape by ISIS. Whereas the majority of women who escaped refused to be named, Ms. Murad insisted that she be identified and photographed, and her advocacy helped to persuade the United States State Department to recognize the genocide of her people at the hands of the terrorist group.” 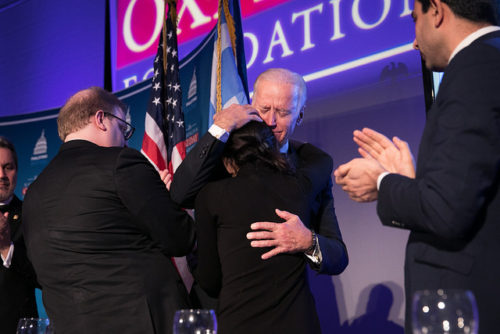 In 2016, Amal Clooney nominated Murad for the Foundation’s Oxi Courage Award. Murad was honored alongside then-Vice President Joe Biden and his son Beau Biden (posthumously). As Murad said in her acceptance remarks:

“The Greek people said `Oxi’ to the Nazis. I say ‘Oxi’ to Daesh (ISIS)”
For moving video from the 2016 Oxi Courage Awards ceremony, please click here. 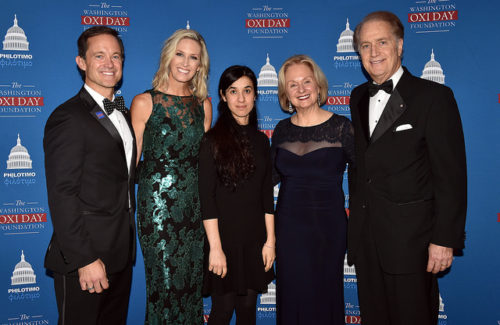